The Alien Love Child Musical is a Sci-Fi-DocuDramedy/Mockumentary about the many lives of Rev. Yolanda, a trans-femme genderqueer interfaith music minister from The Pleiades, born into this Earthly Reality via Muscle Shoals, Alabama, who wants to find her way to trans-scendant gender land. When finding herself incarnated into the hostile

The Alien Love Child Musical is a Sci-Fi-DocuDramedy/Mockumentary about the many lives of Rev. Yolanda, a trans-femme genderqueer interfaith music minister from The Pleiades, born into this Earthly Reality via Muscle Shoals, Alabama, who wants to find her way to trans-scendant gender land. When finding herself incarnated into the hostile environment of a 3 Dimensional Earthly Experience where her body doesn't match her "assigned-at-birth" gender identity, she goes on a journey to make peace with what she has been given and to understand the key to finding her way home. This story is a variation of the classic "Hero's Journey" : A hero ventures forth from the world of common day into a region of supernatural wonder: fabulous forces are there encountered and a decisive victory is won: the hero comes back from this mysterious adventure with the power to bestow boons on his fellow human. 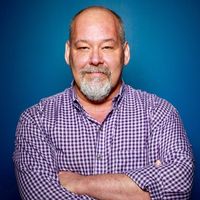 FEELING THE ‘PASSION’: Hardcore disciples of “Hedwig & the Angry Inch” and “Jesus Christ Superstar” have begun to gravitate toward an intriguing new musical theatre piece, “Alien Love Child Musical.” It tells the real-life story of Rev. Yolanda, an Alabama-bred, New York-based performance artist who has evolved from a traditional, if tumultuous Southern Baptist boyhood into mystical transgender-femme-queerdom.

Upon introduction, it’s easy to anticipate cynical stabs at organized religion. The surprising pleasure of “Alien,” however, is its earnest conviction higher powers that encourage expansive human expression. It rejects the notion that faith and God-like figures are owned exclusively of hetero-normatives. Instead, Yolanda wraps herself in affecting images and memories that travel the spectrum of spiritually starved student, disaffected “alien,” and eventual messiah-like leader.

Prior to its official opening, “Alien Love Child Musical” will be previewed with a four-song EP appetizer that leans heavily on Southern-fried rock and soul, with a heavy dollop of Rev. Yolanda’s gospel belting. The songs are a telling indication of the show, while managing to stand strong as individual, thoroughly infectious tracks. It’s the perfect way to expand her cult following to full-throttle mainstream obsession.

-Larry Flick is a 35-plus year veteran of music and media. He first made his mark at Billboard magazine as a senior editor for 14 years. He then took to the airwaves of SiriusXM as a host and producer for 18 years. Along the way, he has also written for magazines that like Vibe and the Advocate, as well as consulting for artists that include Prince and KISS.

"... it truly speaks to every person who has felt like an alien love child in their youth- just to later transform into a butterfly."

Love Divine Tees and other items

for the video Love Divine from the musical: The Church of The Alien Love Child Presents: The Passion of Rev. Yolanda